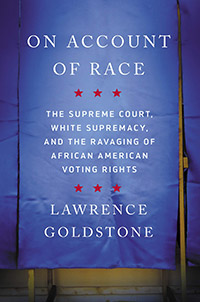 On Account of Race: The Supreme Court, White Supremacy, and the Ravaging of African American Voting Rights

On Account of Race was published in May 2020. With voter suppression perhaps the most significant threat to American democracy, I cannot think of a more important topic to have written about. The book examines case-based evidence to reveal the court’s longstanding support for white supremacy (often under the guise of “states rights”) and how that bias has allowed the court to solidify its position as arguably the most powerful branch of the federal government.

Beginning in 1876, the Court systematically dismantled both the equal protection guarantees of the Fourteenth Amendment, at least for African-Americans, and what seemed to be the guarantee of the right to vote in the Fifteenth. And so, of the more than 500,000 African-Americans who had registered to vote across the South, the vast majority former slaves, by 1906, less than ten percent remained. Many of those were terrified to go the polls, lest they be beaten, murdered, or have their homes burned to the ground. None of this was done in the shadows―those determined to wrest the vote from black Americans could not have been more boastful in either intent or execution. But the Court chose to ignore the obvious and wrote decisions at odds with the Constitution, preferring to instead reinforce the racial stereotypes of the day.

On Account Of Race tells the story of an American tragedy, the only occasion in United States history in which a group of citizens who had been granted the right to vote then had it stripped away. Even more unjust was that this theft of voting rights was done with full approval, even the sponsorship, of the United States Supreme Court.

Got a terrific Kirkus:

An expert on constitutional law skewers the U.S. Supreme Court for its failure to strike down practices that disenfranchise black citizens.

As controversies arise in 2020 about Republican Party operatives hoping to win elections by removing potentially hostile voters from election rolls, Goldstone looks back primarily at 19th-century court rulings to demonstrate that the justices—all of them white males—never intended to uphold the true meaning of the 14th and 15th Amendments to the Constitution. The author’s phrasing is necessarily uncompromising throughout. “In the decades after the Civil War…the Supreme Court,” he writes, “always claiming strict adherence to the law, regularly flexed [its] judicial muscles and chose, in decision after decision, to allow white supremacists to re-create a social order at odds with legislation that Congress had passed, the president had signed, and the states had ratified.” Those rulings rendered Constitutional amendments “hollow and meaningless.” The bigotry and cowardice of the justices allowed Southern states and some Northern states to deny voting rights to blacks with impunity. The shameful behavior extended to justices who have been lionized by historians as beacons of intellectual prowess and fairness. The most significant example is Oliver Wendell Holmes. Goldstone cites Giles v. Harris (1903) as a prime example of how Holmes “distort[ed]…constitutional principles” to deny qualified black citizens the right to vote. In the brief but insightful epilogue, the author wonders whether the morally corrupt justices conceive of the Constitution as a mere assemblage of words or as a grand idea meant to guarantee “fundamental justice” for all U.S. citizens, regardless of race. Without referring directly to the Supreme Court circa 2020, Goldstone posits that democracy can survive only if “all Americans insist that their fellow citizens, no matter what their race, gender, religion, or political belief, be allowed to participate in choosing the nation’s leaders.” Indeed, “it is a simple rule, one ordinary citizens, elected officials, and especially Supreme Court justices should not forget.”

A persuasive case that history matters and that the past is prologue.

And an outstanding Publishers Weekly:

The 1965 Voting Rights Act guaranteeing African-Americans “equal access to the ballot” was necessitated by post–Civil War U.S. Supreme Court decisions that allowed “white supremacist” state governments in the South to deny blacks their constitutional rights, according to this lucid legal history. Novelist and historian Goldstone (Stolen Justice) critiques the “sham neutrality” of Supreme Court justices in the 1873 Slaughter-House Cases decision undermining the “privileges and immunities” clause of the 14th Amendment; United States v. Reese (1874), which weakened federal protections for black voting rights; and a series of turn-of-the-century cases upholding state laws that required voters to pass literacy tests and pay poll taxes. Due to these and other rulings, African-Americans were unable to prevent state legislatures from passing Jim Crow laws throughout the South. Though the Voting Rights Act “has been widely considered the single most effective piece of civil rights legislation,” Goldstone writes, the court ruled one of its key provisions unconstitutional in Shelby County, Alabama v. Holder (2013). He sketches the contours and ramifications of each case skillfully, boldly critiquing the legal reasoning behind the majority opinions. This well-sourced and accessible account makes a convincing case that America’s highest court played a key role in stalling black progress for a century.

On Account of Race: The Supreme Court, White Supremacy, and the Ravaging of African American Voting Rights. By Lawrence Goldstone May 2020. 288p. Counterpoint, $26 (9781640093928). 347.7 On the cusp of a pivotal U.S. presidential election, in which the African American vote will play a critical role, a close look at the checkered history of voting rights is welcome indeed. Constitutional-law historian Goldstone traces the Supreme Court’s shameful collusion with white racists to suppress black suffrage right from the start of Reconstruction. Although the Constitution originally gave states wide latitude in managing elections, resulting in laws that restricted suffrage by wealth, race, and gender, the Fourteenth Amendment, passed in 1868, was intended to affirm both universal citizenship and universal suffrage. Goldstone points out that enfranchising African Americans was a self-preservation strategy for Congressional Republicans, who feared that readmitting the Confederate states without assuring black suffrage would result in state governments dominated by pro-slavery Democratics. Yet the Democrats had an ally in the U.S. Supreme Court, which relentlessly overturned civil-rights legislation based on dubious claims about the function and reach of the Fourteenth Amendment. Goldstone reserves particular ire for Oliver Wendell Holmes, whose reputation as “an unwavering defender of democratic ideals” is undercut by his virulent racism, which prompted him to uphold Alabama’s openly discriminatory voting laws. A sobering but essential and timely history. — Lesley Williams

And a none too shabby Library Journal:

Despite the passage of the 15th Amendment in 1869, which granted African Americans the right to vote, within a decade that guarantee was undermined by former Confederates and the U.S. Supreme Court. Constitutional law historian Goldstone (Inherently Unequal) cogently explores this example of “stolen justice,” detailing how the Supreme Court became determined to restrict voting to white men rather than extend it to racial minorities. It took nearly a century to undo this chapter in history; ultimately, the decision was reversed with the passage of the 1965 Voting Rights Act. Though historians and political scientists have covered Reconstruction thoroughly, Goldstone still manages to add new insights about both the court cases and the justices responsible for injustice. He praises Booker T. Washington’s covert attempts to counteract this decision while condemning Supreme Court Justice Oliver Wendell Holmes Jr.’s efforts to overturn judicial decisions that didn’t coincide with his beliefs in social Darwinism.

VERDICT Goldstone is a first-rate writer, and this book’s readability makes it ideal for classroom use, though all readers will learn from the cases covered here.

“A thought-provoking book about some of the tragic twists and turns of race in the Supreme Court post-Civil War. This is a significant conversation.”  —Jay Winik, best-selling author of April 1865 and 1944.

“No right is more important than the vote. Yet in this engaging and highly readable book Lawrence Goldstone shows how the Supreme Court, the supposed guardian of our fundamental rights, has repeatedly failed to protect this right for the most vulnerable Americans. With an eye for detail and irony, Goldstone uncovers the dramatic stories behind the cases in which the Court left racial minorities to fend for themselves in a hostile democracy.”  —Adam Winkler, Professor, UCLA School of Law; National Book Award Finalist for We, the Corporations.

“Lawrence Goldstone’s book, On Account of Race, is a careful and brilliant analysis of the effort of the Southern states to deprive the African-American population of the right to vote after Reconstruction ended in 1877. There was no disguise of their purpose and no restriction on the method they used. From the grandfather clause or poll taxes or literacy tests, whatever could be used to block African-Americans from voting was openly and emphatically applied. The white population was simply determined to keep the ballot box for themselves. Goldstone shows how the courts refused to interfere in any way with this program. Even such noteworthy judges Justice Oliver Wendell Holmes approved the effort. The book carefully examines the campaign which lasted almost 100 years until the Voting Rights Act of 1965.”  —Leon Friedman, Joseph Kushner Distinguished Professor of Civil Liberties Law, Hofstra University.

“In a book both reasonable and readable, Lawrence Goldstone effectively challenges the convenient mythology that racial segregation was a policy reflecting merely the isolated prejudices of the southern American states in the post-Civil War era. His main focus is the U.S. Supreme Court and the peculiar, absurdly twisted logic across a series of critical cases by which the justices undermined the 14th and 15th Amendments, systematically legitimating Jim Crow. The lesson is clear, that voting and other basic rights, unless broadly defended, can rest on fragile foundations indeed.”  —Ronald King, Professor of Political Science, San Diego State University. Co-author, Removal of the Property Qualification for Voting in the United States.

“In understanding that the right to vote is the guardian of other rights we possess, On Account of Race: The Supreme Court, White Supremacy, and the Ravaging of African-American Voting Rights skillfully and with measured patience, deep insight, and extraordinary attention to primary source evidence charts the course of the United States Supreme Court’s abandonment of African American 15th Amendment voting rights and 14th Amendment equality under the law.”  —Marsha J. Tyson Darling, Director of African, Black and Caribbean Studies, Adelphi University. Editor, Race, Voting, Redistricting and the Constitution.

And there is also a version for high school students… and parents who want a quicker introduction to the Supreme Court’s role in voter discrimination. 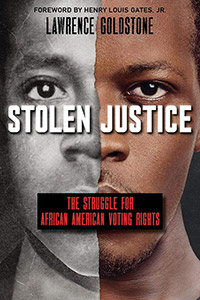 Kirkus wrote: “Goldstone resurrects decades-old court cases, bringing new life to the past by clearly connecting yesterday to today and invoking current questions about which Americans have participatory access to democracy. Short chapters, ample photographs and illustrations, judicious use of illustrative quotations, and straightforward prose make this an engaging read.A critical work.”

Publishers Weekly added:” In clear, vivid language, this timely volume recounts the layered history of African-American voting rights, from the 1787 Constitutional Convention to Georgia’s 2018 block against voter registration for 53,000 residents… In addition to revealing looks at the roles played by notable individuals such as Booker T. Washington and Oliver Wendell Holmes Jr. in the struggle against disenfranchisement, Goldstone further enriches the narrative with nuanced portraits of many lesser-known figures… A strong, illuminating addition to the study of American history.”

And a starred School Library Journal: “Goldstone has provided new and compelling insight into the societal impact of the U.S. Supreme Court’s decisions related to voting rights. A must-buy for all high school collections.”